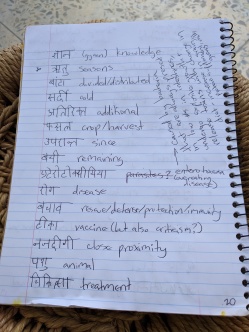 Yesterday I spent some quality time with Google Translate, slogging my way through a “sheep calendar” published by the state government’s Wool Federation. I know I could just ask someone else to read it for me in about 5 minutes, but it’s been a good language learning exercise. My already-weird Hindi vocabulary, which included words like “heddles” and “alum,” now also includes “fodder,” “foot and mouth disease,” and “gelding” (which Google also claims translates to “deforestation”–will have to check on that one). Spending a whole day on a one-page document has also led me to some questions about this publication–the biggest one being, who exactly is it for? I don’t imagine any shepherds wonder what they should be feeding their sheep this month, and go look it up online. They know all this, and in greater detail and nuance than the one paragraph per season allotted in the calendar. Besides which, there is no mention of any migratory cycle–kind of a major oversight in a region known for its…indigenous migratory shepherds.

In the afternoon I took a break to go visit the children’s learning center further down the path, where I hung out in the making/science lab for a bit watching one of the teachers learn to throw pots. Among other gadgets assembled out of trash, there was a YARN PEN (!) which was out of commission, but just needed a bit of re-threading. Teacher friends, take note: you too can make a yarn pen for your classroom! 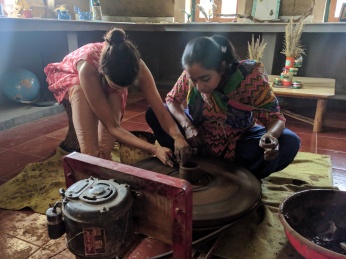 The walk back uphill to the hostel was made somewhat less grueling by the always stunning view, and the promise of tasty future dinners growing in the gardens along the way. 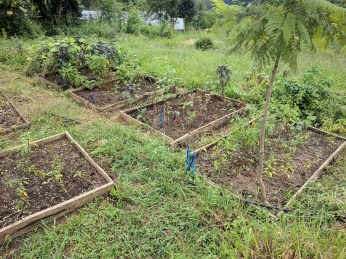