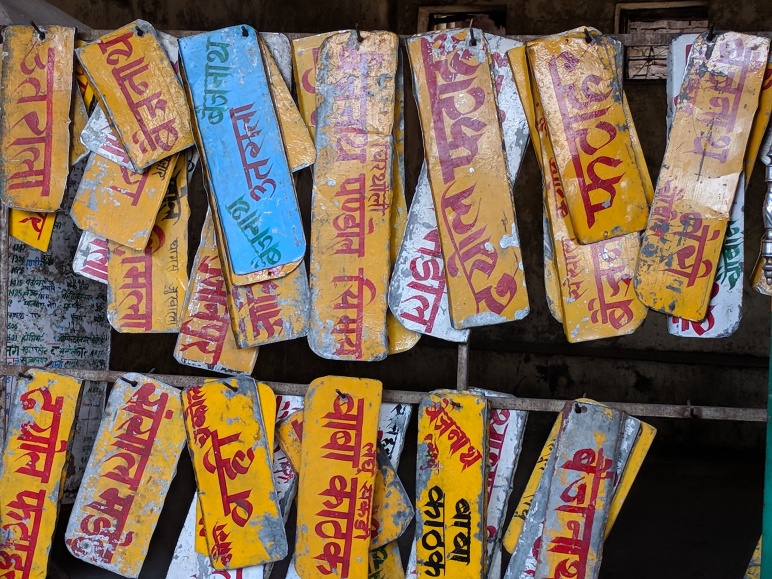 Well, the Fulbright adventure is over, and I didn’t do a very good job of keeping this thing updated. Two problems: time to sit down and write tended to come in the research slumps, when it seemed like there was no point to any of it. Not the best writing motivation. And, when one of those slumps would end with a phone call telling me to get out to this village, NOW, whatever I had half-written would suddenly seem irrelevant as I learned once again that everything I knew was wrong.

So now that I’m back in the US, I’ll do what I can to catch y’all up. And being a firm follower of John Law’s reworking of research method as research mess, I’ll do it all out of order every which way. So: let’s begin at the end.

Making the rounds to get out to various villages one last time, I spent a lot of time ruminating on how much my bus riding skills had improved (there’s not much else one can do while bumping along on the local bus). I remembered my first passage through Baijnath bus station, wending through the chaos following the beckoning hand of the conductor who was guiding me to my next ride, plopping down in a seat with no idea how this particular bus had been singled out as the one I needed to be on. Back then every row of shops looked the same, and I was baffled at how people knew when it was their stop. The first time I did a longer distance trip, I kept asking about timings and reservations because I refused to accept the advice to just get down to the highway and wait for the next bus heading in the right general direction.

By the end I could read the signboards on my own, even fast enough to flag down the right bus as it was trundling past on the road (it helped that they had to go pretty slowly around the curves, and that basically the whole road was a curve). Waiting at the station, it was not uncommon to run into someone I knew (or, more likely, someone who knew me). I learned how to decipher the bus conductors’ rapid-fire incantations as they called out their routes. I learned not to be phased when we would suddenly pull over and the conductor would shuffle us onto another bus, handing over our fare and listing all our stops. And I learned how to hop from station to station until I got to where I wanted to go—and how to recognize when I got there.

One nice thing about having a cyclical research topic, and an inefficient research method, is that you get second chances. I wish I could have stayed another 6 months to get a do-over of the autumn shearing season with the knowledge and language skills that I have now. But I know that the sheep will still be there in another year and a half, and I’ll be able to figure out which bus to hop on to get to them.

One thought on “Coming Back Around”