Next stop: Nako in Kinnaur. People warned us that the road was closed at Malling (pronouncing “mulling” as in “it over” or “spices”), but we got through fine. After we passed the uncertain part, we got out of the car and danced. We stopped for lunch in Nako—thukpa and momos, a welcome change from dal-chaval-roti. While people were finishing lunch, I headed out to walk through town. A tiny little girl saw me and said, “Hallo, Auntie?” in a sort of confused tone of voice, which the women with her found quite amusing. A woman with a table full of goods for sale tried (unsuccessfully) to corral me into her shop. She wanted to know if I was alone, how many people I was with, etc. It was my first experience of the sort of hassling I’d been warned to expect, and it wasn’t really that bad. Brighu saw me wandering off on my own and came to collect me before I got myself into too much trouble.

Mr. Dorje worked his networking magic and found out about some weaver families in Malling, so we headed back there. We had to clamber down a steep slope and over a low stone wall to reach their houses. Finally—the real deal. They had 4-harness pit looms set up facing the valley and the mountains on the far side—a much better view than what I have. 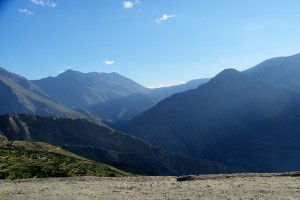 Several weavers were actively working on shawls. All the patterning is done manually, with just the plain twill sections in the center done with the harnesses (fellow fiber geeks will know what I’m talking about). I watched one woman weave a pick of patterning—it took about 2 minutes.

They said that one small pattu takes about 30 days of work from morning to evening. I felt very guilty about the half-warped plain-weave project that’s been sitting on my loom for months gathering dust.

These weavers all started when they were about 12 years old. There were a couple kids running around, but their parents say they don’t want them to become weavers—they want them to get an education, and if they can’t get any other job, then they could take up weaving. Even though they are absolutely master artists, weaving is considered a lower-class profession. So I think they found it baffling that a white girl from America would want to learn. One of the weavers said that I could stay there for the night—I wished I could, but we had to push on towards Pooh.